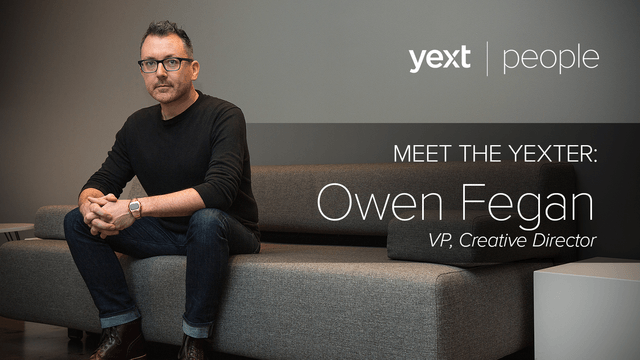 Vice President, Creative Director Owen Fegan has an eye for detail. From driving the strategic evolution of Yext’s brand identity, to grappling with the nuances of font weight and color code, he shapes the company’s creative vision. As a songwriter and musician, formerly of the Irish rock band Rubyhorse — and with a new, entirely self-produced venture as solo artist VEMO out now — it’s safe to say he has an ear for detail, too.

Owen has always been good with computers. Growing up in Cork, Ireland, his interests centered around design and music from an early age. So when a group of his friends decided to form the band Rubyhorse when he was fourteen, there was no question what instrument he would learn to play.

“I got assigned keyboards because I was the computer guy,” he laughs. “I knew about knobs, and buttons, and things.”

The band’s first show took place in their school gym. Word spread quickly, and soon Rubyhorse was playing at school shows and in clubs all over town. “Our first ever newspaper review called us ‘cherubic,’ he recalls. “It was the first time I’d ever heard that word.”

After touring locally for several years, even releasing the album A Lifetime In One Day, the band decided to move to the U.S. and see if they could make it on a bigger stage. In 1997, they packed up and moved to Boston.

“When we moved to Boston, we didn’t know anybody. We didn’t have anything. But we got this gig in an Irish pub that we would do every Thursday night. And we ended up playing for 60 weeks straight. The first week, there were like 2 people in the audience. By the end, people were starting to line up in the afternoon. It was just this really organic growth. And by the time we’d been in the States almost a year, we had begun to get a lot of attention from different record labels. It was just like, what is this weird Irish band doing up in Boston?”

After a few false starts with various record labels, the band eventually produced their album Rise with Island Records. Their single, Sparkle, became a hit — it peaked at #21 on the Billboard charts in the summer of 2002 — leading to TV appearances including Late Show with David Letterman and Late Night with Conan O’Brien, and international tours with artists including R.E.M., INXS, Culture Club, and Def Leppard.

But eventually, Owen began to want something different. “It got to the point where I was 30 years of age, and I’d been in this band since I was 14,” he explains. “That’s more than half my life. I needed to do something else. So I left the band. I moved to New York and started up a design studio.”

Owen’s father was a commercial artist, and both Owen and his brother learned to be graphic designers through him. “That’s what we were groomed to be,” Owen says. “I apprenticed with my dad from when I was 16, through when I left for America when I was 25. So I’d been working in graphic design a long time before I even left Ireland. It was the only thing other than music that I knew how to do.”

He quickly found a lot of work at music publications, which resulted in a full time position at Spin magazine. “I went there as a Creative Services Designer,” he says. “And it was fun because I was doing a lot of photography for the magazine, too. So I’d get to go to shows and photograph Tom Petty, and Metallica, and all of these cool bands. After that, I went to Rolling Stone magazine as Design Director. From there, I went to New York Magazine as Creative Director.

By going to New York Magazine, Owen was intentionally moving closer to the world of digital. Eventually, he set his sights on the tech industry.

“I was in a place in my life where I really wanted to challenge myself, and do something very different,” he explains. “Yext is expanding very rapidly, and that was exciting to me. And this was an opportunity to start from scratch. I got to shape this company’s brand voice from the ground up, and actually build a team. And design, whether you’re working for a B2C company or a B2B company, it’s all just about solving problems and communicating worth to whomever you’re selling to — whether it’s another company, or an advertiser, or a magazine subscriber.”

Over the years, Owen has kept his music alive, teaching himself to sing, record, and engineer along the way. This week, he released an entirely self-produced EP, Maps of Mars, debuting as solo artist VEMO.

Reflecting on the unexpected turns his creative life and career have taken, he laughs, “I came over here for three months. It’s 20 years ago this year.”

So who exactly is VEMO, anyway? “Oh that’s just a nickname I’ve had for a long time,” he shrugs. “It’s Owen — flipped upside down.”

To hear some of Owen’s music, visit VEMO’s website and check out his debut EP Maps of Mars.

Want to join Owen in the Yext creative studio? Learn more about our Art Director role. And check out the rest of our open positions to find the right fit for your talents and experience.

Want to join the Yext team? Learn more about our open positions to find the right fit for your talents and experience.