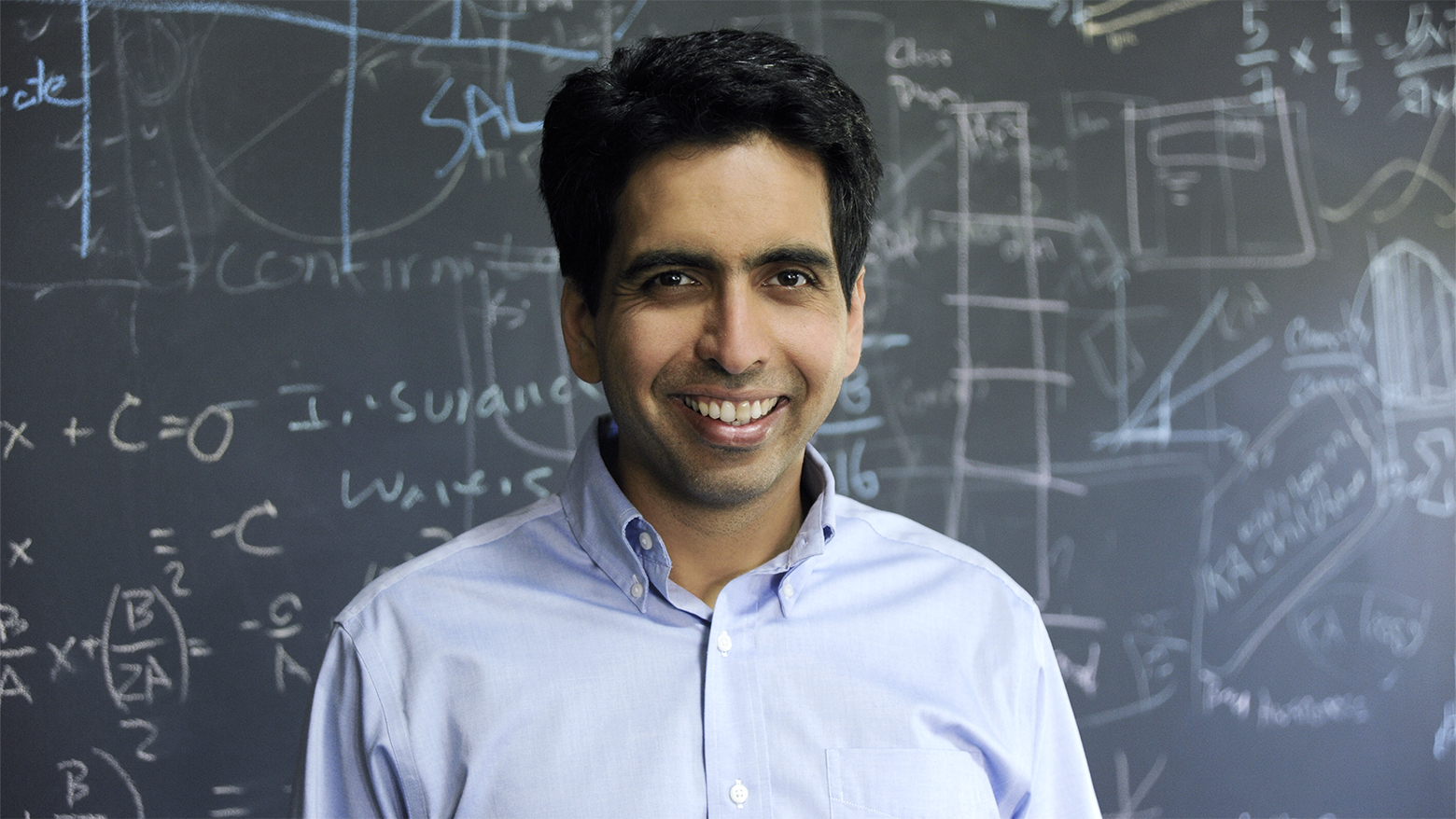 As the founder of nonprofit Khan Academy, a platform consisting of digital learning tools and video classes for kids, Sal Khan has been an innovator in the online learning space for over 12 years. But even he couldn’t have predicted that our adoption of distance-learning would have been so swift – or so necessary.

“In February, I remember thinking, ‘Wow, that’s wild that a whole country would shut down schools physically.’ A few weeks later, it happened where I live,” Khan said. “The question now is how to [navigate this world] so that online learning isn’t just about kids meeting standards — it’s about making sure they feel connected as human beings.”

Khan recently joined journalist Megan Graham, a technology reporter for CNBC, for the latest installment of Yext’s Answer Me This… live digital content series. Answer Me This… features transformational business leaders and accomplished subject matter experts and gets the official answers to the most important questions on how they got where they are, where they are headed and how they see the world.

Here are some of Khan’s official answers to questions asked by Graham:

To start off, I want to give people a sense of what has changed for Khan Academy from the beginning of the year to now. How ‘ready’ would you say you were for the kind of mass shift to digital and remote learning we’ve experienced this year? What have you added or adjusted?

None of us could have predicted what’s happened over the last six to nine months. I think Khan Academy has always been something that could work for students and families on their own – or  it could also work as a teacher tool, aligned to their standards and lessons.

We first caught wind in February that something was going on. This was far before all of us in the US really were thinking seriously about COVID. In Asia, we started seeing our traffic pick up. There was a teacher in South Korea who was saying that they were using Khan Academy to use for distance-learning because all of South Korea had been shut down.

I remember thinking, “Wow, that’s wild that a whole country would shut down schools physically.” Then, a few weeks later, I remember, it feels like, “Well, maybe, this might happen in the US.”

That was when it came into our minds, like, “Wow, this might happen in a larger way. If it does happen, a lot of people are going to probably turn to Khan Academy.” We span subjects and grades: We have pre-K through first grade with Khan Academy Kids. We have math from pre-K, elementary, middle high school, through to college. Sciences, we have a lot in the high school. We have a lot of content that — even though we could have never predicted this — is very well suited to the COVID world and what’s needed.

We just started stress-testing our servers. We started planning webinars for parents and teachers. Everything I’m talking about is free, non-commercial. It’s supported by philanthropy. For those [reading], if you’d like to donate, please do. Khanacademy.org/donate.

First, we just tried to keep up with that. Then, as soon as it became clear that this was a longer crisis than most people were probably anticipating, we started doing new programs to, hopefully, keep people learning through the summer, so that their learning loss would not be too large. We started creating things like “get ready for grade level” courses, where, even in normal times, students might show up in a grade level with all sorts of variants in their readiness.

You wrote an op-ed in the Times about the limitations of virtual school — that it’s maybe never going to be equal to in-person learning. But what are some ways for teachers and parents to make distance-learning more engaging?

Even with [what I do], I’ll be the first to say it: If I had to pick between a physical in-person great teacher, and the best technology on the planet, I would pick the great in-person physical teacher any day.

Fortunately, I would say we don’t have to make that trade-off. The idea is that we can have great technology in support of what a great teacher could do on their own. But to your point, that it’s that much easier to disengage when you’re doing distance-learning, the op-ed that I wrote discussed that there are really two modalities that people have to use right now: One is the asynchronous modality, where kids are learning and getting practice at their own time and pace. That’s where Khan Academy is really valuable for a lot of folks. A lot of folks are leaning on it. Teachers can keep track.

The other is exploring how you can still create the opportunity for live interaction. We’ve seen a lot of just transplanting your traditional lesson plan, traditional lecture, straight to Zoom or to Google Meet. Frankly, I’d argue that some of that’s not engaging in-person, either. But especially when you put it in this modality, if someone’s just talking, just broadcasting… that might as well be a video. I would argue that that’s not a good idea.

What I wrote in that op-ed is, at minimum, teachers should make it very interactive. They should be pulling them out of the screen with cold calls, putting them into breakouts, giving them opportunities to work with each other, because they need that right now, unless they’re able to meet socially-distanced in a park or something. They need that social interaction.

Also, [parents and teachers] can mix things up with icebreaker-type activities. We have this little mini-project called refresh.khanacademy.org, that was done, actually, for COVID. They are these little five-minute icebreakers, to get your blood flowing, laugh a little bit — and we’re encouraging educators, regardless of what they’re teaching, to do every 20 minutes, every 30 minutes. It’s like, “Everyone, close your eyes and draw an elephant, with your eyes closed. Then, show what you drew.”

Another thing you mentioned in your op-ed and, I think is a really important issue, is that connectivity and broadband access is not a given. For a lot of kids, it’s a difficulty. What do you think could be done right now? How are you pushing to bridge this gap?

This is very real these days. I think this is the really hard thing about what we’re going through right now, is that, in a lot of places, 20, 30 percent of the population — or more — don’t have sufficient access to things like broadband, computers, everything you just mentioned. Even where we’ve seen fairly heroic efforts to get folks access. New York City, for example, distributed 300,000 laptops. Even then, they’re seeing 5, 10% of the population is just not engaged in some way, shape, or form. You can imagine, these are already the 5 or 10% that were already kind of on the edges, even during normal times. People are trying to figure out, do they need more social services? Are their parents not to be able to support them? Maybe they’re essential workers, who knows?

To some degree, for us at Khan Academy, we’re trying to say, “Look, these kids need to engage, and they need to have some access for us to even be able to start to do our work.” What we’re trying to do is just understand what people are doing to help address that. Then, spread the word.

We’ve seen places like Phoenix, the Unified School District there, calling up every student every day. Someone from the district is calling up every student. It might be a 30-second phone call, but that seems to be making a difference on making sure people are engaged. Obviously, you need to first distribute the laptops, get internet access. But then, you have that.

In places like Maryland, we have seen several programs that are actually quite effective. They’re doing distance-learning, and most of the kids are at home. But that 5, 10% of kids that either don’t have proper access or don’t have the proper support at home, they’re allowed to come to their actual school facilities in a socially-distance safe COVID way. They’ve hired people who aren’t the teachers to just give them the support, make sure that they’re focused, provide lunches. Those, to me, are some of the best examples of how we navigate what we’re going through right now.

We have a question from a student, who asked: “Do you really think Ivy Leagues are worth all the money?” I think we were all talking about that so much earlier in the summer when people were saying, “Is Harvard going to go back? Is it going to be worth the same?” What do you think about that?

Well, I think there’s a broader question about universities in general. Even before COVID, there was kind of an unsustainable thing happening, where the cost of higher education was growing faster than the rate of inflation by a good bit. Higher education and health care were the two things that were just growing faster than inflation, which is not sustainable. At the same time, you increasingly see that not all majors are created equal in terms of employment.

A lot of young people were told that higher education is a ticket to a middle class or upper middle class life. But then, they’re finding that the jobs available to them, oftentimes, are the same jobs that just a generation ago, a high school diploma was sufficient for. That was already a problem. Now, COVID has exacerbated it.

In terms of an Ivy League education, I think it depends on what you do with it. An education at a school like that can be incredibly powerful. You could meet some great professors, be around other students that are really pushing you to be better, and, if you are in the right majors, the return on that could be really large. I went to MIT, and I wouldn’t have traded that experience for my life. I met my wife there, many of my best friends. I also met a lot of people there that kind of pushed me to kind think bigger, and all of that. That was great. I don’t know what would have happened if I didn’t go there. Maybe I would have done exactly the same thing. I don’t know. I’d like to believe it was good.

Let me put it this way. It’s definitely not a question of, “I must go to Ivy League and life will be great,” or, “If you don’t go to Ivy League, life will not be great.” That, I don’t believe at all. I think, wherever you go, make the best of it, and you’re going to be just fine. Wherever you go, think about your future, and what you’re majoring in, and getting resources to help yourself — then, you can get a good return from your investment of time and money.

If you could go back and talk to your 10-year-old self, what would you tell him to do more of?

Just put yourself out there. Don’t care too much about what other folks think. Enjoy the ride. It’s going to happen faster than you think.