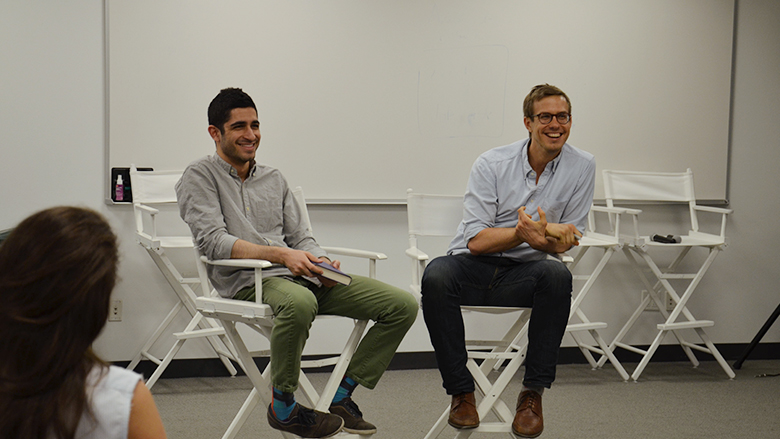 Yesterday the Yext Book Club featured a very special guest speaker: Nicholas Carlson, Business Insider’s Chief Correspondent and author of the recently released book, “Marissa Mayer and the Fight to Save Yahoo!”, which tells the inside story of Yahoo!’s decline, Marissa’s controversial career at Google, and her fight to save an Internet icon.

Nich provided the book club with an illuminating look into what drove him to write the book about Marissa’s two-year stint as President and CEO of Yahoo!, his candid take on the reasons behind and impact of both Marissa’s accomplishments and failures, and his predictions for the company’s fate.

The rest of the evening was spent with Nicholas fielding questions from Yexters about the book’s content and the work that went into getting it published. When asked about his inspirations for the book’s narrative style, he cited ‘DisneyWar’ by James Stewart and ‘Barbarians in the Gate’ by Bryan Burroughs as two major influences. One Yexter asked what other major tech executive he’d be interested in writing about, to which he responded readily with Larry Page, CEO and Co-Founder of Google. And, little known fact, Nich named his book after J.K. Rowling’s titles, because Marissa Mayer and her various “adventures” at Yahoo! would be the defining draw for readers.

In addition to questions about the book, the audience asked more general questions about his background, how tech became his career focus, and his thoughts on the evolving state of journalism in today’s digital media environment. He wrapped up the visit by signing copies of his book for Yext Book Club members with a purple pen, appropriately.

Thanks again to Nich for stopping by Yext and offering a fascinating inside look into his new book!